Artistic authenticity, highly dynamic playing, and attention to detail are the hallmarks of Trio Marvin and makes the ensemble one of the leading chamber music formations in Germany.

A year earlier, only a few months after its foundation, Trio Marvin won the 1st prize at the Felix Mendelssohn Bartholdy Conservatory Competition in Berlin and subsequently received the 2nd prize, the audience award, and the „Young award” at the Premio Trio di Trieste International Chamber Music Competition in Italy.

Trio Marvin has performed at the Berliner Philharmonie, the Konzerthaus Berlin, the Musikverein Graz, the Prinzregententheater in Munich as well as UKARIA Cultural Centre and Melbourne Recital Center in Australia. Their concerts have been broadcast by various radio and television channels such as BR, SWR, ORF, Deutschlandfunk Kultur and further. The debut CD of Trio Marvin – Echoes of war (2019) – with works of M. Weinberg and D. Shostakovich was released as a cooperation of the Genuin label with SWR and is a part of the "ARD Prize Winners”-series.

Starting with the season 2020/21, Trio Marvin will continue its musical path with a new permanent member. The award-winning pianist Dasol Kim has joined the formation and will perform in various concerts throughout Germany and Europe.

Since its foundation, the Trio Marvin has established itself as a formation with passionate dedication, sovereign technique, and a broad repertoire ranging from baroque music to the works of contemporary composers. In the upcoming season, the trio especially looks forward to presenting the audience with rarely performed works by C. Ph. E. Bach, E. Krenek, E. Bloch, and R. Clarke among other composers as well as their classical and romantic repertoire. 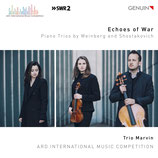